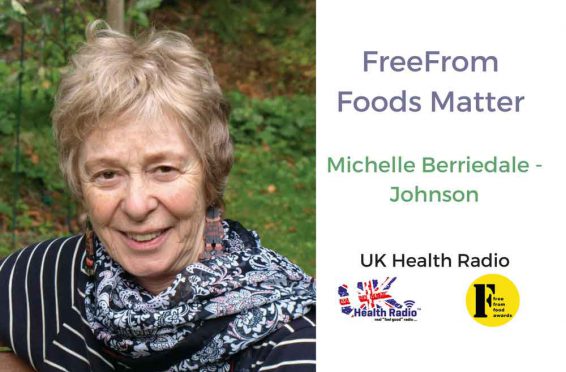 An Interview for UK Health Radio with Michelle Berrie-Dale Johnson

This year the FreeFrom Food Awards celebrate their 10th anniversary and as the only FreeFrom Awards in the food industry the popularity and prestige of the awards continues to grow. Michelle Berriedale-Johnson launched the awards ten years ago when ‘freefrom’ was very much a cottage industry. She believed that establishing the awards would raise the profile of freefrom food within the food industry and set a standard of excellence to which manufacturers could aspire. Today the industry is counting its turnover in billions and interest in this market from manufacturers and consumers continues to grow.

Michelle has been involved with food for over 40 years, first as a caterer, then a food historian, a food writer, a food manufacturer and finally as a ‘FreeFrom’ (gluten-free, dairy-free, nut-free etc.) food expert. It was when her 18-month old son and husband developed a dairy intolerance that Michelle decided the family would embark on a dairy-free diet. As this was back in the 1980’s there wasn’t much dairy-free food available so Michelle decided to make her own! The family started by creating an organic soya based ice-cream. They also began to produce ready meals that were dairy, egg and gluten free that could be frozen and a range of vegetarian foods as well as dairy-free chocolate. They sold their food in supermarkets but sales didn’t take off as Michelle had anticipated so she decided to branch into education. During this time many other people living with allergies and intolerances continued to develop their own products and many like Michelle started selling foods over the internet and then to the supermarkets. This later triggered Michelle to launch the awards in 2008 after she was continually invited to taste and judge freefrom foods for various magazines.

To enter the awards the product must be free of at least one allergen and be available nationwide. There are now 20+ categories and over 100 judges including professional foodies (manufacturers, chefs and cookery writers), medics (dietitians and nutritionists) coeliacs and allergy sufferers and parents of allergic children, a dozen or so keen freefrom bloggers and a good sprinkling of ‘outsiders’ to benchmark the products against ‘normal’, non-freefrom equivalents. This year Irish bakers BFree were presented with ‘Marble Mo’, the FreeFrom Food Oscar for 2017. BFree’s Sweet Potato Wraps won the Product of the Year. Judges praised the wrap not only for being ‘enormously versatile, beautifully soft and pliable, a lovely warm colour and tasting delicious’ but for being free of all of the major 14 allergens. ‘A totally inclusive, totally delicious product – just what a freefrom food ought to be!’

Along with BFree, over 30 gold champions along with silver and bronze winners spread over 19 categories were presented with their certificates by Antony Worrall Thompson. He has been a long standing patron of the awards and commented, ‘It is amazing how much has changed in just ten years. All credit to the pioneering small producers who have followed their dreams to create wonderful freefrom foods – to the supermarkets who have backed them – and to the FreeFrom Food Awards who have encouraged and celebrated them!’

Other winners included Rana’s Artisan Bakery, BoojaBooja, Evexia Thrive pasta, Rule of Crumb from Northern Ireland, Bellfield Brewery and the West Cornwall Pasty Company, with Tesco winning Retailer of the Year for the third year running. In celebration of the Awards 10th Anniversary Clare Marriage of Doves Farm Foods was crowned as the Awards’ FreeFrom Superhero for the enormous contribution that the Doves Farm flours and foods have made to the freefrom industry over the last ten years.

Aside from the awards Michelle’s passion to educate people started with a newsletter about food intolerance and food allergy for members of the public and also the medical profession. Over time this has evolved and is now a website (Foodsmatter) with 1000’s of pages and over a million unique visitors a year covering many different health conditions including ‘proper’ allergies as well as intolerances that are not life threatening but still very serious.

All the information found at foodsmatters.com has not been written by doctors so should not be viewed as advice but a valuable reference to information that can then be discussed with a medical professional. Michelle believes that as we still understand so little about why food intolerances exist, where they come from, what causes them and why our bodies react the way they do that different approaches and theories should be considered, not just the mainstream ideas. Taking into account modern living, pollution, the way in which we live our lives, and the significant changes in food, agriculture and food processing it’s vital we look at the bigger picture and develop a personalised approach to managing our own health.

Michelle and her team have branched out further as the FreeFrom world continues to grow. They also run the FreeFromEating Out Awards and the FreeFrom Skincare Awards, which alongside the FreeFrom Food Awards are inspiring, informative and invaluable resources.

To listen to this interview in full and hear some of the winners share their story visit The Food Teacher on UK Health Radio.

If you have an interest in a particular topic or comments about the show please email: info@thefoodteacher.co.uk

To find out more about Michelle Berrie-Dale Johnson and ‘freefrom foods and awards’ visit:

About the Author: The Food Teacher, Katharine Tate, has worked as a teacher and education consultant internationally in primary and secondary schools for over 20 years. Qualified as a registered nutritional therapist, Katharine, combines her unique education and nutrition expertise to offer schools, organisations and families advice, education programmes, practical workshops, and individual/family clinical consultations. Katharine also presents The Food Teacher show on UK Health Radio where she discusses the importance of food for health and wellbeing. She has published 2 books: ‘Heat-Free & Healthy’ and the award-winning ‘No Kitchen Cookery for Primary Schools’. Look out for The Food Teacher at Food Festivals and events throughout the country during 2017.