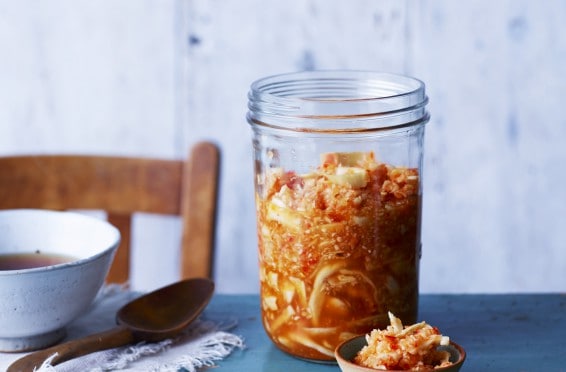 Being fascinated in food and its many benefits I have read and researched a great deal about fermented foods and the impact such foods have on our health especially our digestive and immune systems. I recently attended a talk by Charlotte Pike who has just written the book ‘Fermented’. Aside from learning about water kefir, milk kefir, yoghurt and kombuccha I was particularly interested in the cultural and seasonal link with Kimchi and, even though my family tell me it’s quite an acquired taste, it really is amazing in so many ways.

Kimchi is a traditional fermented component of Korean cuisine and is a staple with many daily meals. Its main ingredient is cabbage and includes other vegetables and a combination of different spices and flavourings.

The traditional time to make Kimchi is in the Autumn, in preparation for Winter. The unique production process is called Gimjang, which in 2013 was proclaimed part of the UNESCO intangible Cultural Heritage of Humanity list. The process involves families coming together to make their own recipes, which are passed down through the generations. With many regional differences in ingredients and methods, making and eating kimchi is a firm part of Korean heritage.

For reasons associated with its ingredients and the fermentation process it’s nutrient levels and possible health benefits are vast, which may be one of the reasons it’s now become a world-wide food.

Its many benefits based on research include antioxidant properties, immune boosting, skin heath and digestive and circulatory support.

It’s nutritional value can alter depending on the ingredients used but generally it tends to be high in fibre, vitamin C, B vitamins, beneficial phytonutrients and probiotics. Its main ingredient cabbage is a cruciferous vegetable alongside broccoli, cauliflower and kale and is a good source of magnesium and indole-3-carnbinol’s, which research has shown to have anti-cancer effects particularly colon, prostate, lung and breast cancer.

A high level of antioxidants are found in the cabbage and many of the other ingredients used in traditional kimchi recipes, these work to protect the body from harmful free-radicals that develop naturally from our metabolism and externally from pollution exposure, inflammation in the body, smoking and UV light.

As 80% of our immune system is found in and around our intestines, the health of our digestive system is a key factor for optimal immunity. Probiotics are the bacteria that help support the natural balance. Due to its fermentation kimchi is high in lactobacillus bacteria, which are hugely beneficial for this natural balance of organisms most notably in the intestines. Many of the other ingredients that are used, such as chilli, ginger and garlic also have anti-inflammatory, anti-bacterial and anti-viral properties, which also support our immunity.

The impact of cruciferous vegetables on the liver as a detoxifier alongside the beneficial bacteria found in kimchi are thought to reduce skin inflammation and optimise skin health.

Being a good source of fibre, high in magnesium, fermented and rich in probiotics kimchi is thought to support the digestion of food assisting with greater absorption of nutrients, consistent bowel movements and reducing constipation.

The nutrients in garlic and chilli are beneficial for the circulatory system with research showing its effect in lowering LDL cholesterol and protective effects on the artery walls. Alongside this it is thought to impact on insulin levels, which would provide further benefits to the circulation.

If you have not eaten foods like this before and if you are introducing to children I would recommend building up amounts slowly, e.g. start with a teaspoon and then slowly increase portions. As it is high in fibre and probiotics it may cause wind and bloating in susceptible individuals.

If you’d like to make your own, try this fantastic recipe from Charlotte Pike and you may reap the many benefits from this traditional food that is growing in popularity as a superfood.