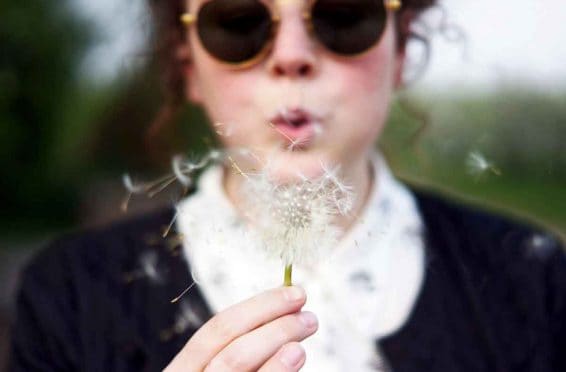 Red eyes and sneezing are common allergic symptoms this time of year for hay fever sufferers. Hayfever, which is also known as seasonal rhinitis, is an allergic reaction to pollen from grass, trees and weeds during the early spring and summer months. It is thought to affect more than 20% of the UK population and up to 40% of children. It’s can impact on quality of life, increase risk of asthma and sleep problems leading to general fatigue and reduced cognition.

Hayfever is caused when the body makes allergic antibodies (IgE) to certain substances, such as pollen, house dust mites or mould, which are known as allergens. When the pollen count is high symptoms can intensify. Other immune cells are involved in allergic reactions and they release chemicals such as histamine, which can produce common symptoms. These cells are found in high quantities in the nose, throat, lungs and skin, which is why symptoms can include itchy eyes and throat, sneezing, blocked or runny nose, watery and red eyes, itchy skin, headaches and shortness of breath.

Managing hayfever especially with children is not always easy but some strategies and nutrients that are worth consideration include:

Monitor daily pollen levels and on warmer, dry days when counts tend to be high plan some time indoors.

Focus on: Encouraging your child to get changed when they come home or in from outdoors and if their symptoms are intense having a shower and washing their hair may also help. Simply wearing sunglasses and applying a barrier balm to the nostrils may reduce the amount of pollen that can enter the nose and eyes and alleviate symptoms.

Many people with hayfever also have sensitivities to certain foods, which can increase symptoms. Common foods include wheat and dairy but it can be hugely variable, such as eggs or oranges.

Focus on: Keeping a food and symptom diary and try eliminating wheat and/or dairy for a 2-week period. Consider support from a registered nutritional therapist, such as myself, to help with a suitable elimination diet and note other factors such as behaviour, sleep and digestion.

Consider your child’s balance of omega-3 and omega 6 rich foods. Omega-3 fatty acids are considered to be anti-inflammatory whereas omega-6 fatty foods can promote inflammatory conditions such as hayfever.

Focus on: Oily fish, such as sardines, salmon, mackerel or herrings 3 times a week and nuts and seeds are recommended. If your child struggles to eat fish consider an omega-3 supplement rich in EPA and DHA. It’s also important to avoid foods made with hydrogenated or partially hydrogenated vegetable oils like margarine and baked goods as these can damage the beneficial omega-3 fats and increase inflammation.

Increasing vitamin C rich foods may help to support immunity, which explains why levels deplete quickly when the body is fighting an infection. It’s also a natural anti-histamine and can help to minimize tissue damage and provide increased immune protection due to its antioxidant status.

Some foods contain high levels of histamine so this may be worth investigating as a potential cause of increased symptoms.

Focus on: Eliminating high histamine foods such as cheese, chocolate and canned/smoked fish, strawberries and citrus fruits to see if symptoms reduce.

Ensure the immune system has optimal support, especially when the pollen count is high. This can involve increasing specific nutrients (vitamin C, vitamin D and probiotics) that can be beneficial and also reducing ‘anti-nutrients’, such as sugar, that may compromise immunity. Sugary and processed foods, which impact on blood sugar balance can put pressure on the immune system and increase inflammation.

Focus on: Swapping refined grains, breads and pasts for wholegrain alternatives and choose unpackaged foods and cook fresh foods as much as possible.

Having hayfever as a child doesn’t necessarily mean it’s for life, as many people report their symptoms improve with age with over 10% reporting it completely disappears. Following a healthy diet and lifestyle can be significant factors in supporting your child with hayfever and consider some of the advice above to help banish those summer sniffles.